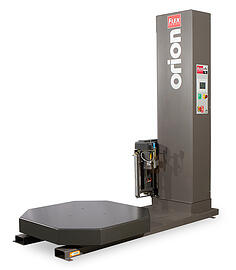 Many manufacturers today seek to lessen their company’s carbon footprint and improve their production’s sustainability through a variety of means, saving both time and resources. Effective manufacturers know to improve sustainability in all areas of their production, wherever such improvements are possible; this includes end-of-line packaging and stretch film wrapping, where today’s automated technology can perform wonders in lowering resource consumption.

In deciding whether or not sustainability improvements in your production’s end-of-line film wrapping are worth the effort, it is useful to consider the contrasting capabilities of automated and non-automated film wrapping.

Manual application of stretch wrapping is a laborious and time consuming process, and wrapped film applied with this method is ten times less effective than automated wrapping, on average (20% strength versus 200-300% strength). Manual application of stretch film results in much less stable and reliable final products, and often allows for overconsumption as workers try to compensate for the lower stability by using additional film.

Stretch film wrapping machines, like those build by Orion Packaging, can efficiently wrap and many times the strength of manual application. By stretching the film material significantly more than hand-wrapping means can, automated wrapping machines greatly lower the consumption of film, which can save thousands of dollars annually. Automated stretch wrapping machines can also offer:

Numbers Behind Stretch Film Use

The underestimated, yet great annual scope of stretch film use in the United States can be supported with quantitative data and industry studies. Industry analysts estimated that, in 2011, the U.S. would consume 1.9 billion pounds of petroleum-based resin in producing over $1.8 billion worth of stretch film. Relating the production demands and costs of stretch films to the high cost of oil and petroleum-based products, anything that can be done to improve sustainability and limit stretch film consumption should be done.

Conversely, there are great strides being made to improve the sustainability and limit consumption of stretch film materials; the Dow Chemical Company has reported that technological and scientific advances in the last ten years have granted the down-gauging of stretch films by over 25%. This is estimated to have reduced global polyethylene resin consumption by one billion pounds each year, roughly equivalent to 293 million gallons of gasoline.

This statistical research shows that improving sustainability in end-of-line film wrapping is as important, if not even more so, than sustainability efforts in other facet of production operations. There is considerable potential for businesses to improve their sustainability by cutting back on film consumption with today’s automated film wrapping technology which saves valuable time, money and precious resources.

What to Look For

In optimizing a wrapping machine’s capability, a powered pre-stretching is typically conducted. At this early stage, Electric motors turn twin pre-stretch rollers at different speeds; this speed difference results in the film’s stretching. Many materials, like wrapping film, thin as they are stretched. Efficient manufacturers counter this thinning by keeping the distance between the two pre-stretch rollers to a minimum. Manufacturers seeking a machine with productive pre-stretch capabilities should also consider the machine’s speed range, roller surface and threading method.

Broader force-to-load controls are also an option for manufacturers seeking to use efficient film wrapping machines with heavier or more rugged products, such as concrete. Accessible and automatic force-to-load abilities make certain machines ideal for these film wrapping applications.

Machines equipped with variable wrapping payout speeds can play a very large role in the successful packaging automation in a manufacturing operation. The strongest and most stable automated wrapping results occur when wrapping machines are able to instantaneously increase their payout speed when covering product corners. Failure to do so, or inability to do so instantly, can instead present drag on the film and tearing.

When seeking to improve end-of-line sustainability, taking the above machine features and techniques into consideration can save manufacturers thousands of dollars future production costs. As the recycling of film wrapping material is often far too expensive for many manufacturers to consider, the most effective way to improve sustainability with your film wrapping is to limit waste, excess and overuse of the film itself. This can be done by integrating a powerful, efficient and automated film wrapping machine in your packaging process.

To learn more about how automated stretch film wrapping machines can vastly improve your end-of-line packaging sustainability, contact us today.